Water Cane Bunny, sounds pretty kinky doesn’t it; like it could have something to do with furry play and a bamboo cane that was soaked in water to make it extra stingy. That would really hurt I imagine, a bamboo came soaked in water might make it really whippy and hurt like hell. Then on top of that add in a bunny suit with a drop down panel in the back to use said water soaked cane…wow a lot of kink going on there.

Sadly Water Cane Bunny has nothing to do with any kink whatsoever. It was a text message sent to a friend after a long day of working on the condo (Yes we closed on the condo and we have been working diligently since) after asking if we did anything for Easter. Water Cane Bunny was supposed to read: The Easter Bunny Came for the boys…..auto-correct took over and made it into something totally obscure and I was tired enough to not pick up on it as my mind was convinced of what it SHOULD have said.

We closed on the villa in 30 days from signing the contract, it boggled the minds of our real estate agent and the mortgage lender. It helped that the seller had incentive to move as quickly as possible and that I was driven as well to meet a deadline. Once the mortgage lender had the paperwork uploaded that I could sign virtually I was in there eSigning. The rest of the paperwork that needed to be signed was printed, signed, scanned and uploaded back to them the same day.

It helped that I found our real estate agent from FetLife and she is a D-type. We liked her from the first time we met with her. Great personality, super energy, AND on top of that she understood some of our needs as she lives the lifestyle herself.

I had the week before last off work and all but one day  of it we spent working. The “day off” was the day I took L to her chemo treatment.
The bones of the villa came back good on the inspection, which was what I had been waiting to hear. As long as the bones of the place were good the rest was all cosmetic. 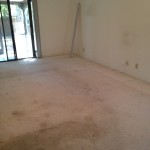 The living room from the dining area. 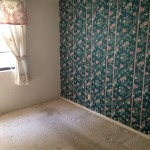 Back of master bedroom 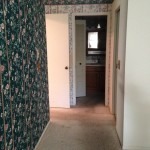 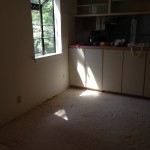 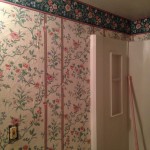 Seeing those pictures you now have an idea of what we were up against, thankfully we were able to close quickly which has given us time to do this work before we have to be out of the apartment.  The wall paper, the carpet and the paint. Light switches and outlets were/are all different(as of writing this the outlets have all been swapped out and the light switches will be next.)

We found one surprise in the form of an old leak in the master bathroom; the leak itself had been fixed but the damage it caused had been hidden. This was in the form of a vanity that had gotten wet at one time and the press-board had swelled. The tack board under the carpet (Yes, there was carpet in the bathroom) had turned black and even rotted in some places. The worst though was the drywall behind the wallpaper had soaked up a great deal of water and was full of black mold. While it was an added workload we hadn’t counted on we are glad it was found before anyone started getting sick from the mold and we had to do this work later.

With finding that I made the decision to gut the master bathroom, not really what I wanted to do but finding all that left me no choice. I got gloves and masks and the dry wall was then cut out and tossed in a bag by itself and then sealed shut and tossed out.

With all this I have noticed that it has served to bring Kayla and I closer. We both work well together and manage to focus on what is at hand along with the end goal. In some cases she has her job and I mine but in the end they merge for an end result. We were both nervous about how this would work out as in past relationships we had some baggage we were carrying. We worked through it and we worked past it and we are doing a wonderful job.

Has it been all hunky dory?? I wish I could say yes but in the end we are still human and we succumbed to long days, hard work, and lack of sleep.
There were a few times we started moving in a direction that bordered on bickering and short tempers. I recognized it for what it was and called a time out. at which point we backed up and took a different direction.
D/s has taught me that if you keep doing the same thing over and over again you get the same results. To get different results you have to change what you are doing.  There are no two ways about it.

In the past it would have been an escalation of tempers and butting heads. With us before it even got close to that point it was stopped and a dialog was opened, things were discussed and a decision was made.

We’ve learned, we’ve grown, we’ve grown closer as a couple, along with moving towards a bigger future for us both. I even pushed some of Kayla’s limits. Not being one to like trim painting or cut in work; Kayla rose to the occasion and did some of both when there was no way I could do it. 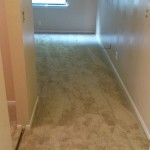 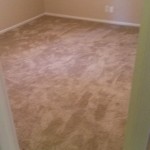 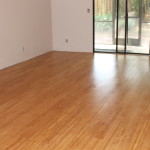 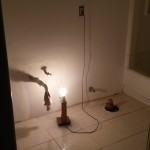 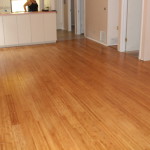