A special thanks for this week’s prompts that were inspired by a message from subgirlygirl! You can find her original post here:http://subgirlygirl.com/post/132373890338

I came across this as I was scrolling through my dash on Tumblr and as I read it the gears in my mind began to turn. Limits such a small word yet in our lifestyle it carries so much weight. The things we do, the boundaries we push as a Dominant all hinge on that one word.

Limits are in place for a reason, they are the checks and balances of the world. Regardless of whether we are Dom or sub in one way or another we have to toe the line on certain limits; it could be with family, friends, and more times then not at work.

What happens when those limits don’t align, it can get ugly and it can get messy. When looking for a partner that fits our limits in the Lifestyle we need to fully know and understand our own. I’m a sadist, I love inflicting pain, the right kind of pain that is. Mostly I am a spanko, I love giving spankings in all shapes and forms, hand, paddle, flogger, and sometimes even canes. There comes a point when you have to decide what is a deal breaker, as a sadist I align with someone who is a masochist.

Could I have a relationship with someone who is not a masochist to my sadist; possibly.
It would take a lot of communication, trust and understanding. They would need to understand my need to top someone from time to time. If that person did not want me to spank them and did not give me the ability to exercise those needs it would be a deal breaker. Being a sub does not mean you are a masochist just like being a Dom does not mean you are a sadist.

How could there be a relationship if each others needs were not being met. What if you are Poly and the person you are looking to have a long term relationship isn’t. Down the road that could be very problematic and in most cases is a deal breaker.

When I met Kayla we became friends first, oh we knew each other had a proclivity for the kinkier side of life to be sure but it was friends first kinks later.

WE had many late night talks about our kinks what we liked, what we didn’t like, what we thought we might like. We talked, we negotiated and in the end we found our kinks aligned rather well.

There were things we talked about that made her nervous, rope play being one of them. In time as our relationship grew and she trusted me she agreed to try some rope play. Did I go full on and do an elaborate Shibari tie the first time out of the gate. No! I started slow with a simple harness, taking my time and going slow. In time she grew to love it and now she loves the feel of rope as it glides across her skin.

Canes were another limit. They scared the bejebuss out of her. Again we talked and did our homework and then when all was said and done we talked some more. Canes are no longer a hard limit for her and we do incorporate them into our play, some I have even made myself. Do I go full on with her with a cane, no but they are a part of our play. While they are not her favourite when all is said and done the next day I will find her admiring the marks left behind in the mirror.

Are having your limits aligned in a relationship important…Yes! It doesn’t matter if you are in a committed relationship or just looking to do a Top/bottom scene with someone you met at the club. 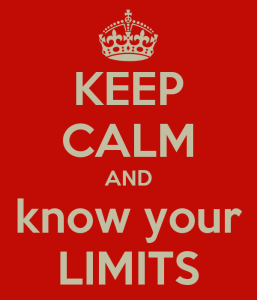