Shortly after our shower this past weekend is when I began edging her. This post is long, I wrote it over the course of several days as the events occurred. While I thought about breaking it up into a couple posts I decided it would lose its edge.

The first was that very night when we climbed into bed, I was aggressive and didn’t hold back, I went right for that sweet pussy and began rubbing, kneading, and pinching her clit. Her moans soon filled the room and those sweet lips dripped her nectar. It wasn’t long before she was begging me for release, her body writing in my arm. I leaned in and huskily whispered one word in her ear, “No”

The next morning the alarm clock went off signaling it was time for me to begin a new work week. I hit the snooze button and sunk back into the pillow as I drifted on the edge of sleep and being awake till the alarm went off once more. She lay beside me, a vision of beauty in her sleep, her breath soft as she barely moved in her dreams. I drank her vision in as I softly stroked her hair, a soft moan escaped her as she stirred to my touch. I hesitated no longer as I slid an arm under her rolling her over on her back. I draped a leg over hers using it to spread her open. In an instant my hand was between her legs as I caressed her already slick pussy.

With a sharp gasp her body went limp in my arms. I held her till she caught her breath as I stroked her hair telling her what a good girl she is.

Fast forward to that afternoon, we’re sitting eating dinner and Kayla tells me she wants to go to the fitness room and workout for a while. When I told her I thought that was a fine idea, she disappeared upstairs to change before I had the chance to say another word. When she returned Kayla was sporting her workout clothes and leaned in to give me a kiss. I held her arm and I whispered into her ear to go back upstairs and put in her Ben-Wa balls before she goes. 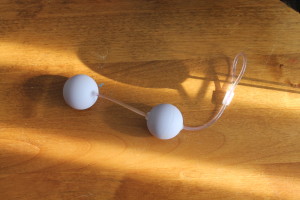 When she came back down she took my hand in hers and guided it between her legs. I could feel the end of the loop indicating the balls were deep within her. Upon her return I asked how her workout went with my devious smile. “Oooooh Daddy it was fine” as she rubbed up against me. I swatted her ass and sent her upstairs to change and take the balls out.

That night in bed we lay there talking for a little bit and I began gently caressing her with my fingers. Along her cheek, down her neck, across her chest. My fingers danced over her breasts, a light feather touch over her hardening nipples. Then back to her neck, tracing her ear, then back down to her chest and breasts once more. I kept this up for a good ten minutes, her body answering my touch. She whimpered as my hand danced across her body, whimpered with need and desire.

My hand wandered down her stomach, as it passed over her mons, automatically her legs parted inviting me. My fingers roamed back upwards as she whimpered now in disappointment. Again my fingers slowly wandered downward, once more to only make their way back up. The third time they slipped between her cleft, just lightly, oh so lightly passing over those damp lips. Her hips rose as my hand backed away, denying her no more then the lightest of touches.

Minutes must have seemed like hours to her as my fingers did their dance till I decided there was to be no more. Kissing her forehead I wished her good night and sweet dreams as I rolled over for sleep to claim me.

The next morning my day began as any other, the music from the alarm clock waking me from my nights slumber. Making my way downstairs to flip the switch on the coffee pot I sat down to read some blogs. My first cup of coffee drank I want upstairs to get dressed and awaken my babygirl. Once up she made my breakfast as I finished getting my things ready for work.

When she was done making my coffee for the trip to work I wrapped my arm around her waist and kissed her deeply, my hand diving into her pajama bottoms. Her lips were moist, wet, and inviting to my fingers as they once more found her pearl. My fingers played her as she clung to me, her mouth buried in my shoulder to stifle her moans.

During the day we email one another; usually just chat talk about how our day is going. This time though at the end of a random response to her I would write at the bottom in italics things like; I want you girl, I want to breath in your scent, your femaleness, I want to taste you and drink deeply of your well. I kept this up through the day in email and txt messages, at one point ordering her to go edge.

As I was leaving work I sent one more txt message: “I’m coming to claim you girl” It was a quick ride and once the bike was locked up one more txt went out “Coming to get you” As I came up the walk I saw the blinds on the kitchen window flick open and there she was watching me come up the walk. Just as I was about to put my key in the door to unlock it the door opened and there she was. I wrapped an arm around her and kissed her hard and deep taking her breath away.

After dinner we decided to go to the pool, I gave her instructions that once we are back she is to put in her Ben-Wa balls and they are not to come out till I tell her to.

I watched her lay on the bed as she inserted the balls, the look on her face was priceless, one of need and want. I walked up to the bed and gave her pussy several slapped as she writhed on the bed. She told me how she would have to work to keep them in and she adjusted them. I asked her if she needed any help and she answered no, She said the masochist in her said yes but the babygirl was saying no and the babygirl was winning. I looked at her and told her it was Daddy’s choice not hers and I pressed my finger against her clit and slapped her pussy several more times.

Her body reacted instantly as a gasp escaped her lips, moans of “yes, yes, oh yes” came out as a chant. I pulled my hand away and licked my fingers clean. I held out my hand to her helping her up off the bed. “We still have things to do before the night is over babygirl.”

When Kayla was done with her phone call I asked her if the coffee pot was set for me in the morning. I then told her it was to be an early night and lets head upstairs. Once there I kissed her hard while giving her tit a hard squeeze. I then told her to get strip and come to the side of the bed. Now let me say  that all the things I put out in the bedroom were out of sight so she had no idea of what was about to happen.

I pulled the blindfold out form under the pillow and put it on her, then having her sit on the bed with her feet on the floor I lay her back. Spreading her legs my fingers brushed her damp pussy. Not wanting to longer any longer I dove in with my tongue. After several days of edging her reaction was immediate; she grabbed me by the hair and hung on for dear life. With one hand I grabbed the loop of the Ben-Wa balls and wiggled them around as I ate her.

She gushed, not so much an orgasm but her juices flowed like a river and I lapped them up greedily like a man who hadn’t had a drink in a long time.

When I pulled my head back she was laying there gasping for breath, the top of the first ball peeking out from her pussy, I reached for the camera and took several pictures as she gasped at hearing the shutter. Then grabbing the loop of the Ben-Wa balls I slowly…so very slowly pulled them out and set them to the side.

I plunged back into her while I pressed the Hitachi against her clit, I moved it to her tits running it over her nipples, while doing that I could feel her pussy gripping me tighter and tighter. Holding the Hitachi in one hand and grabbing the camera in the other I snapped of several more pictures.

Setting the Hitachi to the side I put my hand around her throat and I saw her face slip, teetering on the edge of sub-space. I knew what to do that would push her over the edge, my hand still around her throat I slapped her face while I took her, then once more, I watched the change come over her, saw her slip deep into that place. The change in her facial expression, the shift in her eyes.

I made her squirt several more times, rode her hard, slapped her one more time and finally stopped when we both were sated.

Holding her while we lay in the bed I talked her back, sat her up and gave her the water to drink.

She was just gaining the use of her legs back as we made our way into the shower.