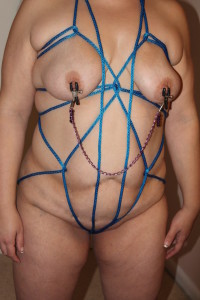 little flower in the harness and nipple clamps

Over Thanksgiving when I was with little flower I had brought some rope with me to try out a new harness tie I had found.

It was a very simple tie yet a lot of fun and as I played around with it I found that I could tweak it a bit.
Part of the harness goes between her legs and then up the back and across her hips. When I ended the tie I had enough rope to tie it off on the part that came up from between her legs.
What this managed to do was to pull the rope tight against her soft bits.

As I spanked her I could grab the rope and give it a tug which not only tightened against her lips but her clit as well.

While being a simple tie I found it to be quite enjoyable both doing the tie and removing it later as it afforded excellent opportunity for caressing.

I used a 30 foot section of rope to tie the harness, here is the tutorial for doing the tie:

First, find the center point of the rope. The center of the rope drapes around the back of the person’s neck. Bring the ends of the rope around one another three times; these three twists will become the three diamonds you see in the front of the finished rope harness. 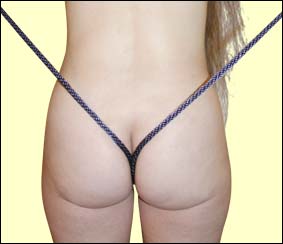 …then up and apart on the other side. From this point, each end of the rope will wrap around the person’s hips and then through the lowest twist in front, which sounds complicated but is actually quite easy: 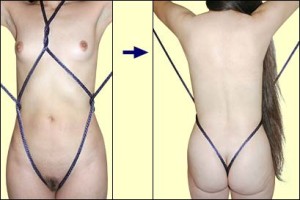 See? Nothing to it. Don’t pull the rope tight; as you continue this process, bringing the ends of the rope around to the front, passing them through the twists, and then bringing them back again, the rope will need to slide to let the diamonds open up in the front. It’s okay if the rope is loose at this point; it will become tighter as you work your way up.

You’ll do the same thing again–pass the ends of the rope around the person’s back, then around the front and through the twist, like so: 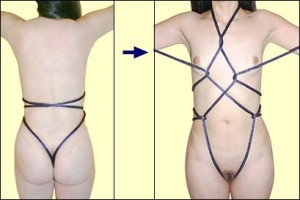 It’s exactly as simple as it looks. The free end of the rope wraps around and around another part of the rope; if you reach the end of the rope, just tuck it beneath the wrap. This technique is quite handy for making “handles” that are quite convenient for grabbing, if you like.

Thanks to Tacit for the photo’s and tutorial