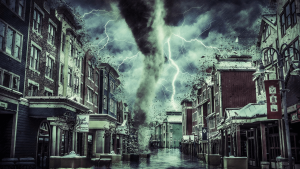 It was a dream I had about a week and a half maybe two weeks ago. The dream has stuck with me and hasn’t let go. What it hasn’t done is cause any anxiety or distress but my mind keeps going back to it. Most dreams I have fade soon after I wake while others stay with me a bit longer, and the more common then not are the ones I have no memory of at all other then I woke and know I had a dream.

At the start of the dream I was in my childhood home where I lived till I was eighteen. Very little had changed in the house other then the furniture seemed to be much sparser then I remembered. I was alone in the house and I wandered between the kitchen, dining room, and the living room. In the living room there were no longer any curtains on the window and I spent some time looking out at the view. While the wider view from the window had not changed much from what I remember what I did notice was that the outside of the house had changed. Colors seemed faded and the brick and concrete work had begun to crumble.

After a minute or so a niece showed up and then shortly a nephew was there also. They settled down into seats in the living room and it was then Kayla arrived. We all moved to the kitchen and I began washing some dishes that were in the sink, Kayla was with me and then my niece and nephew joined us. It began to feel warm and I thought we should change the temperature controls which were in the dining room. Where there used to be an air conditioner mounted in the wall was now a flat black screen that controlled all aspects of the house. I played with it for several minutes but could not get it to work and we all went back in to the living room.

It was there that I told Kayla it was getting late and I was tired and we needed to get some sleep. We went down the hall to my old room but there was already someone sleeping in there. I decided we should try my sisters old room and when we went in there was already someone sleeping there as well. Coming out of there I looked in my parents old bedroom and it was empty but I walked away form it and we went back to the living room.

When we arrived back in the living room there were more people there that had arrived but I didn’t know any of them. I was still tired and wanted to sleep but every time I found a spot where I thought we could sleep there was already someone there.

I was standing in the living room looking out the window feeling exhausted and trying to figure out a way to get some sleep when the dream shifted.

I was still gazing out a window which looked on and open field which was ringed by a forest with mountains far in the distance. When I look at the interior surroundings I was now in an old library at a college. The walls were lined with bookcases made of wood with intricate carvings, books filled every space in the shelves which were on every wall. There was a large table in the center of the room, again made of wood like an antique boardroom table. The chairs around the table were also wood and had elaborate scrolling in the legs and arms of the chair. I was alone in the room, not a person to be seen or heard anywhere. I noticed a door with bright light streaming from it and decided to see where it led. I

As I walked down there were doors on each side that led to bedrooms and some were bathrooms and/or showers. It was totally silent and there were no people to be seen in any of the rooms.

Making my way back to the library I noticed someone was in there, a young woman. I began talking to her and we delved into a deep and in depth conversation. While we talked more people began filing into the library. There were soft murmurings around us as the others were having their own conversations.

At one point I looked out the window and I saw a storm had blown in. The sky was black and purple while the wind gusted and had the trees almost laying over. Then I noticed the tornadoes. Dozens of them, thin little one, huge wide ones. I turned back around and told everyone it was no longer safe here and they had to leave. I helped everyone get a a room in the hallway where I knew they would be safe.

Once everyone else had gotten to safety I was back in the library and the tornadoes were they and I knew it was to late for me.

The dream shifted again and now I was inside on of the tornadoes. I was being carried by it and I could see debris flying past me, big planks of wood, my face was being abraded by the sand and dirt carried in the winds. I could see nothing but the debris and even that was muted by a dull grey color all around. I couldn’t make out any trees, building, the mountains, nothing.

Oddly enough while I was being flung around by the tornado I was surprisingly calm taking it all in as if in slow motion. In my mind though I was saying a mantra over and over.
“I will not die” “I will not die” Those words filled my mind while I was carried by the wind.

Next thing I know I opened my eyes and I was laying on a hospital gurney with people standing all around me. One of them whom I thought to be the doctor looked at me and said “I’m so grateful we were able to bring you back, you died on us.”

It was then that I woke in my bed.

I didn’t feel shaken by the dream when I woke but as I lay there in bed I began going over each portion of the dream again. It was very vivid and very real, I did fall right back to sleep and slept till the alarm went off in the morning. When I awoke and was having my coffee the dream came back to me again and has been popping up at random times in my thoughts.

Now I did get curious and looked up online what it means to die in your dream. I was surprised by what I had found and found it fascinating: You are undergoing a transitional phase and are becoming more enlightened or spiritual. Although such a dream may bring about feelings of fear and anxiety, it is no cause for alarm as it is often considered a positive symbol. Dreams of experiencing your own death usually means that big changes are ahead for you.