This week I thought it would be good to talk about something that is very important when doing any kind of rope tying.

The first thing to have on hand before doing any kind of rope work is safety equipment, the easiest thing to obtain is a pair of Safety/EMT scissors.
They are available at most any pharmacy and you can even turn them up at flea markets.
They are generally inexpensive running anywhere from $3 to $5.
These scissors can if needed cut through the rope quickly and cleanly without harming the person you have tied.
The bottom of the scissors is flat allowing them to go under the rope and along the skin with no harm.

Another handy tool to have is a hook knife. Like the scissors a hook knife can cut through the ropes if needed and not harm anyone’s skin. Although there is some caution needed with a hook knife as unlike the scissors some of the hook knives do have a point. It is easy enough to find one that has a rounded point instead of a point. The nice part about the knife if it can be small enough to carry in a pocket or a key  ring. 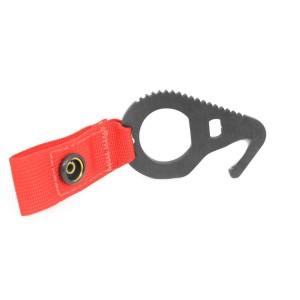 One thing to keep in mind when doing the wraps with the rope is to always pull the rope rather then push it. Pulling the wraps allows for a smooth sensation, while pushing the rope through can cause discomfort and even in some cases cause you to inadvertently scratch the person you are tying.

When tying the person being tied should be able to move their feet and wrists comfortably within the rope, yet it should be tight enough that it does not dig into the skin.

When doing your wraps you should be able to slip a finger between the ropes and the persons skin. The wraps should never be to tight. If they are to tight; one it shortens the amount of time you can keep a person tied. Also rope that is tied to tight can cause serious damage especially if left on to long.
Nerve damage and cutting off circulation is a very real and possible side effect if not done properly and monitored while doing a tie.

Yes you can tie someone that tight for a very short amount of time but you must be vigilant and constantly monitor them for any signs of nerve damage and/or circulation being cut off.
Those deep rope marks look very sexy after the rope comes off but be aware of what you are doing.

The pictures you see on Tumblr and all around the Internet of a model with her breasts tied so tight they are purple are not a good thing. Realize those models are making money off those shoots and they have a team off people around them. There is a very short period of time to take the photo’s and once done the ropes come right off.

When you have someone tied up never leave them alone for any length of time. There are ways to let a person who is tied think they are alone but they actually aren’t.

Always keep an eye out on the areas that you have tied, look for any kind of skin discoloration, if you do see any then blood flow is cut off and it is time to remove the ropes.

Ask if the person you are tying is experiencing any tingling or numbness.
If they have any tingling then you have about 5 – 10 minutes before the rope becomes uncomfortable and will need to come off.
If they have numbness then the rope should come off immediately.

The type of rope you use makes a big difference also when you are tying someone. Hemp or a soft rope is preferable, do not use an abrasive rope that could cut into the skin.

I’ve said this before and I’ll say it again, tying up your partner can be a way to share a very sensual experience between two people.
Aways play safe.