Several days ago little flower and I were playing, later that evening while we were talking she asked me about holding back. I looked at her with a quizzical look and asked her to explain what she meant.

She told me that when I was giving her a spanking that that she could tell I was holding back. We talked about it and she told me she could tell that the Beast was lurking but he wasn’t fully out. That he was hovering just on the edge.

I thought about what she said and in a way she was right.

There were a number of things that had been on my mind that day which had been the cause of me holding back. One was her neighbors, she lives in a townhouse and the walls are not the thickest. There are many times I can hear them thumping around next door.

Another thing that I told her was I know that the other day when we were just playing lightly her pain tolerance was very low. Even the slightest of nips that I was giving her seemed to bother her more then normal. I do love to nip and bite her, her skin is so soft and sweet I just can’t resist it.

The other thing that had been weighing heavy on my mind is that today I will be heading back home after a two week stay. Even though I am writing this several days in advance it still sits heavily on my mind.

The other thing, the big thing at least to me and I don’t know if this is something that other Dom’s have thought of or about. Lately for some reason I have been thinking a lot about what if I can’t stop, what if I push to far. What happens if there comes a time I can’t pull back?

We have a safe word, we never play without it. Little flower has even used it a few times and play has come immediately to halt, but there is always that thought. What if?

We talked some more and in the end I realized that yes the Beast does need to come out and play more.

Now I will say when it comes to the rules I have imposed upon her I do not relent in the least, they are written in stone and they are to be followed with no exception.

The next day (Friday) found us with a number of errands to run and the morning was quite full of things we had to take care of. We got out on the road and began knocking things off the list. On our list of places to go and things to do was to find a ball gag and some new nipple clamps. We had discussed ways to keep the noise level down and I decided in the end of all the things possible a ball gag would be the best.

The alligator nipple clamps were losing their bite and I wanted to look for some clover clamps.

The ball gag was found easily enough but the clover clamps were sold out, someone had come in and bought the last five sets they had in the store. (I want to go to their party!)
Instead I found a set of clamps based on surgical clamps, not quite what I had wanted but they looked like they would get the job done.

Once our last errand was completed we headed home. When the bags were put away and everything was where it needed to be I told her to go upstairs, strip and wait for me.

It was only a couple of minutes before I was making my way up the stairs and to the bedroom, there she was like the good girl she is, naked, standing in the middle of the room waiting for me. The first thing I did was put the ball gag on her, it fit nice and snug. I figured the best way to test it out was to then put on the new nipple clamps. 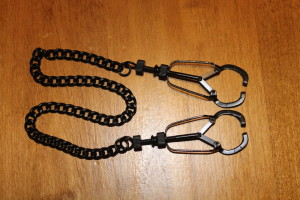 It took a moment of adjusting but I got them on nice and snugly and to give both them and the ball gag a test I gave a sharp tug on the clamps. Sure enough her reaction was immediate and the sounds that emanated from her were nicely muffled.

At that point I put my left arm around her waist from behind holding her and began spanking her, not hard, at least not yet, I wanted her warmed up. Cheek to cheek one after the other, I could feel the heat beginning to rise up in her skin and I looked to see my work and her ass was starting to glow a nice pink color.

After a few more minutes of that she indicated she had enough of the ball gag and I removed it from her mouth, but I was not down yet. I removed the nipple clamps at the same time and she let out the most delicious little yelps as I released each one. I ordered her to the bed where she was to lean over it on her stomach with her feet on the ground. Now that she was warmed up I began using the tips of my fingers instead of my palm and spanking her ass in an upward motion.

What had started out as a pink color was now turning a rosy red. My hand needed a break so I broke out The Devils and began using them both at the same time. I alternated between swinging them like a flogger and cracking them like a whip. Her skin had gone from warm to hot now.

I needed a break and ordered her to stay where she was till I got back.

A few minutes later when I returned she had not moved an inch, I didn’t make a sound till I was right behind her and told her I was going to get on the bed and she was to lay over my lap.

She did so without any hesitation and a small whimper or two. I lay one hand on her back and massaged her ass with my other. I then told her that I wasn’t done just yet and there was still more spanking to come.

Since it had been a few minutes I again began slowly and warmed her back up again. Once she was warmed up I told her from that point to count each time I spanked her.

She dutifully counted each and everyone I gave her, each one harder then the last. My intention was to push her, to see how long she would last before enough was enough for her. 50 strokes and a total of 45 minutes later she collapsed on me, boneless and spent.

I helped her roll over and sit up at which point I gave her a drink of the iced tea on the nightstand.
I then climbed in next to her holding her in my arms as she lay there floating deep in sub space.

Yes, it felt good not holding back.