Sometimes things just seem to work out in an unexpected way; this was one of those times. I had been trying to figure out about a babysitter for the boys so Kayla and I could get out to the club to celebrate her birthday. It so happened her family came into town and offered to take the boys for Sat. night giving us the night off.

It didn’t take long to start putting things together, already early Sat. morning I had the toy back packed and ready to go sitting in the trunk of the car.

After dinner we went back to the hotel where everyone was staying and we got the boys settled in and bid our fond adieus.

The roads were fairly quiet as we made our way to the club and we arrived shortly. I put the toy bag on the shelf so it was handy for when we needed it. We were still a bit early and there was only a handful of people there. This was a big night at the club being the annual Halloween party. Now with work, birthday celebration, and visiting family we didn’t have any time to put together any costumes, let alone something kinky for the club. I told Kayla to get her collar and wrist cuffs from the toy bag and I put those on her, from that point on we were a vanilla couple exploring…

More and more people started showing up and it wasn’t long before the place began to fill up and the energy began to change….all for the better.

We made our way upstairs to the Dungeon and watched some play going on up there, two kittens were in a cage and being “tortured” then another couple decided to play on the Cross and a flogging scene took place.
The whole time I was staring intently at a number of people there which had Kayla on edge. See with it being her birthday I told her that there would be a very good chance I was gong to announce free spanks to anyone who wanted. I kept letting her believe that I had something up my sleeve and she continued glancing at me out the corner of her eyes and squirming about on the floor where she sat at my feet.

After watching some of the other scenes taking place I told her to go downstairs and fetch the toy bag, by this time she was very much on edge from my playing games with her about who was going to give her spankings along with me.

She returned with the bag and set it next to me, I was hoping some of the area would open up soon as the cage was still in use, the Cross still being used had become flogging practice, the same woman bound there and three people taking turns flogging her, and the spanking bench had become the spot to sit to take in all else going on.

After a few minutes I had an idea which worked out quite nicely.

At the bottom of the stairs coming down off the Dungeon was a corner with a Victorian sitting chair. 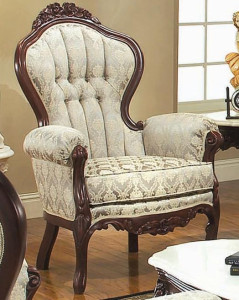 On each side were two make shift benches with lit pumpkins giving off ample yet soft light; let me also make mention that this was was also a walkway for anyone going to or coming from the Dungeon.

I told her to follow me and grab the toy bag. Once downstairs I took the bag from her and set it to the side of the chair. I looked at her and told her we were going to do something different tonight and this spot and using this chair was where she would get her birthday spankings. I grabbed her dress and pulled it off her in one swift movement, leaving her in nothing but her thong. I grabbed her by the hair and pushed her head towards the chair. As she spun around I noticed something about the thong she was wearing, she has three pair of lace thongs that I choose form for her to wear at the club. The lace in the back had big gaping holes in it. I pulled her back up and questioned her about it. She sputtered about it happening when she put them on her fingers had gone through the lace.

I still had her hair in my hands as I looked at her and told her why didn’t she think about saying something to me, here we were at the club, her ass on display in ripped panties, I went on as to how that reflected directly on me and made me look bad in front of all these people. I held her hair tight in my grip as I slapped her face, her eyes rolled and instantly she was in sub-space. I then pushed her head first into the chair and told her that since her panties were already ripped she shouldn’t mind of I ripped them some more. With my free hand I grabbed the thin material and left them hanging in shreds as I told her now people will have something to look at while I spank you.

I took a paddle, the wooden spoon, and her favourite short cane out of the bag and set them behind her. Getting her ass warmed up with my hand first I then switched to the paddle for a bit, I pulled her head up and asked her for a colour and she said “green” Her eyes had that shine of someone slipping away into that place masochistic subs love to go to. I told her from that point would be her birthday spanking and she was to count each swat.

I picked up the wooden spoon and cheek to cheek began giving her her spanks as she counted out each one. Stroking her hair, rubbing her back, and telling her what a good girl she is her spanking began.

By this time people has begun to walk by going one way or the other, a few stopped to watch for a brief moment, some smiled as they passed, and one made the comment about what a good idea to put that chair to such good use. A switch we had been talking to earlier in the evening walked by carrying a crop. She smiled broadly as she saw what was going on, she waved her crop in the air and I smiled back and nodded as she gave Kayla a couple of strikes with it on her thighs before continuing her way upstairs.

Halfway through I stopped and asked her for a colour, “yellow” was what she told me, I gave her  c chance to catch her breath and with my hand firmly in her hair I started spanking her once more though I backed off on the intensity as I had one more thing up my sleeve for her.

When I was six swats away from the end I stopped once more and asked her for a colour, “green” she told me. I lifted her head and stroked her cheek telling her that I was going to push her now.
She smiled and said “Yes Daddy”

I set down the wooden spoon and picked up the short cane, she never really cared for it and the sting it delivered but now with her being well warmed and deep down I knew this was the time to put it to use.

Three good stout smacks to each cheek had her wiggling about and when it was her last, the one for good luck I decided to do something just a bit different.

The cane being made of a light material which made it very springy, I stood behind her lined the cane up so it would cover both cheeks and drew it back held by the tip of my finger. Releasing it the cane snapped forward and bit her on both cheeks simultaneously. She let out a gasp and she jumped as it made contact with her.

I put the cane down, grabbed her blanket, wrapping her up in it and took her in my arms.