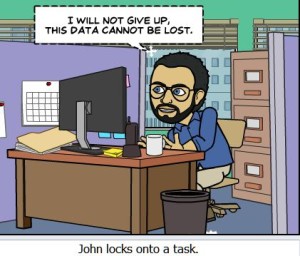 Well life does take a different road at times…

Once I had the puter back where I wanted the first thing on the plate was to help Kayla update her site. That had been on the back burner for some time all hinging and waiting for my cumputer to running at full steam.

After that..well I am a patient man to a point, I am also a persistent man.
I had talked about how in all this I lost quite a bit of data, photo’s documents, etc when my backup drive failed.

Well my days of digital hoarding aren’t quite over yet.

A number of years ago I began playing with Linux, I love it. So much more stable then Windows. It’s a solid system and over time I can pretty much do everything I did on Windows on Linux.

I have always had a interest in computer forensics, it has fascinated me. Long story short I found a forensics program that runs on Linux and I have been in the process of recovering my data from the failed drive. Thus far I have recovered close to 3/4’s of it and as far as I can tell my photos have been coming back fine along with other files.

So yes I have been a bit busy with that undertaking.

On the upside not only am I recovering most of my files but I’ve picked up a new skill as well.

I do have some things in the wings, I’ve been scribbling down some thoughts, ideas, and even have a few things started as drafts in Word documents.
So hopefully the crazy month of January will be behind soon and I can get back to some naughty business.