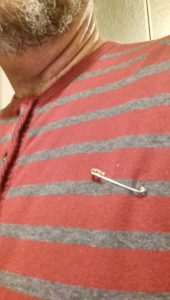 I wear a safety pin, every day. I wear it when I go to work, when I go get coffee, no matter what I do I am wearing a safety pin. Often am I asked by people why am I wearing one. My answer will slightly vary depending on who I am talking to but the base of it always remains the same.

There are many reasons why I wear one and they are all deeply personal to me on a number of different levels.

While Kayla and I are very open about our D/s life and even our #kinkyfuckery both here in our blogs and in our podcast, politics has always been something very personal that I don’t go into very often with very many people.

My father immigrated to the US when he was 19, he remembered all to well the end of WWII.

While Hitlers rise to power was based on helping the German people and stabilizing the economy we know all to well how that ended up.

While in the beginning Hitler did do some good things. It was through him the Volkswagon Beetle come into being; a cheap economical way for working class people to have transportation. One of the very few good things he did.

At the time even though my fathers family were then supporters of the current German government it was hard not to be. If you didn’t support them you were against them and it didn’t go well for you. He would talk about how when the German troops would come through town they would help themselves to whatever they wanted and you didn’t refuse them.

There were some underground efforts to oppose the Nazi regime but it was far and few between.

History reminds us all to well about the atrocities that the Jewish people endured; families separated, concentration camps, gassing, and on and on.

In the end it wasn’t just the Jewish people that were effected, Hitler also went after Catholics, Protestants, and socialists.

I am most reminded of this quote from a speech:

The US has it’s own history of similar discourse sadly when the Japanese were interred in camps after the attack on Pearl Harbor. George Takei was in a camp as a child and speaks openly about that time in his life.

Are we doomed at repeating that once more with Muslims? Once/if it starts with the Muslims will it end there or will it just be the beginning of something more?
~~~~~~~~~~~~~~~~~~~~~~~~~~~~
Is that it? Is that the only reason, no there is more.
When I was on my late 20’s I had a lover, her name was Vicki. Vicki was amazing in so many ways. She was passionate; in her caring, in her joy, in her love making, and in her art. She opened my eyes to so many other possibilities, that life wasn’t just black and white, that everything wasn’t just cut and dry. Vicki was also trans-gender, she was in the process of transitioning from a man to a woman. She talked to me often about how she never felt right as a man but as she became who she truly was she felt more right about her life and how she belonged and how she fit in.
Most importantly Vicki was a person, she was my friend, and for many months we were lovers.
In time we both moved on, her journey took her along a different path then mine. We went on out own journey as friends and kept in touch for some time after (this way way before the Internet and cell phones) but as life has it we lost touch. Since we had mutual friends I would hear about her now and again.
One day I heard news of Vicki that tore my heart, she had died, I never truly found out what happened and at this point probably never will will.
What I do know is a beautiful star had it’s light extinguished way to soon.
Since then I have had other lovers, both men and women.
It is for Vicki and the others that I have loved and the right to love who you want that I wear a safety pin.
~~~~~~~~~~~~~~~~~~~~~~~~~~~~~~~~~~~~~~~~~
High school was a rough time for me, very rough.
I was different then the other kids and they didn’t let me forget it.
I grew up in a very rural community yet my mother had an urban upbringing.
Kids can be cruel and they dished it out.
I was teased mercilessly, I was bullied.
During lunch I did my best to make myself small and unnoticeable.
I was the kid who was nervous when school let out and constantly looked over my shoulder wondering when I was going to get jumped.
I tried to fit in in ways that were wrong and actually made things worse for me.
At that time there was not the awareness of bullying that there is now.
I am thankful that in my day there was no social media like there is now.
When I see the bullying and harassment that occurs there on a daily basis it is heartbreaking.
Having been one who was bullied I will not tolerate it in others.
I know all to well how it can effect someone and how long it took me to move past it.
It is for those who are bullied that I wear a safety pin.