I know that most of you are looking for my Monday morning book review but I will freely admit that with having to wrap things up at work last week and getting packed and prepared for my trip I did not have time to write a book review this week.
Now if things go the way I think they may tomorrow there may well be time for me to write one during the day.

My flight went very well and I actually arrived an hour before I left.
Well Okay not really but it was 45 minutes after I left with going through the tine zone.

Seeing little flower and holding her in my arms was wonderful, we even got a few looks from people as they walked past.

We spent the afternoon together catching up grabbing a bite to eat and she was being a bit sassy. I let it slide the first time, the second time I called her out on it giving her numerous and well placed pinches, then the third time I told her she was going to be in for it tonight as enough was enough.

Since after tomorrow we may not be able to play for a few days leading up to her birthday I let her open one of the boxes I had sent her for her.
We had talked about blindfolds and gags and I ordered her a set from the same place I got her collar and cuffs so they all match.

The gag is not a standard one it is actually a bit gag and the blindfold is called a “cats eye” based off the aviators goggles. 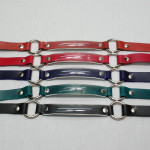 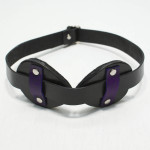 I put her wrist and ankle cuffs on first, then came her collar.

Once that was done I had her kneel on the edge of the bed facing out, it was then I clipped her wrists to each of her ankles. Once that was done I put the blindfold on first, then the gag.
It was then I got the riding crop, I traced it across her breasts, slowly first one then the other, then down between her legs. It was delicious as she had no way of knowing where it was going to touch her next.

Then pinching and pulling her nipples I got them good and hard, it was then the real fun began.

I then started flicking the crop across her nipples, first one then the other then back to the first one again. I kept this up for a while, then I slipped my hand between her legs and felt the moisture pooled up there.

Giving her nipples a few more flicks with the crop I then went lower with it and began slapping her clit with the crop. Now I was going between both nipples and her clit.
She was writhing and moaning by this point and I started concentrating on her clit. Thankfully I had the foresight to put a towel under her as it didn’t take much from some well placed slaps with the crop for her to start squirting and gushing everywhere. Even with the gag she was making noise loud enough to wake the dead.
I got 4 more orgasms from her this way with the crop before she gave me the signal that she needed to stop.

Unhooking her cuffs first and helping her into a sitting position I then undid the blindfold and then removed the gag.
I held her for a while, cuddling her and talking to her, giving her some water to drink.

We spent the next several hours me taking her over and over in different positions before we both drifted off to sleep in each others arms.

Every time I saw her today wince from her nipples rubbing in a certain way and being tender I couldn’t help but smile.