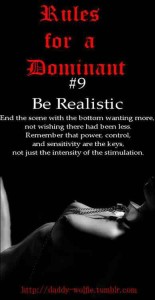 When I first got my flogger and tried it out on little flower it was very tempting with a new toy in hand to really have at it and and see what it could do.
I held my hand as I knew it was the first time she had experienced a flogger.

Before even using it on her I let her handle the flogger, see what it felt like in her hand, showed her the way to swing it so she knows first hand how it should be done.

Once she was over the bed I picked out some music, a Linkin Park, Living Things  album. The music has a good beat without being to much over the top.

I began working the flogger in a slow figure 8 until I was swinging it in time to the beat of the music, I kept this up occasionally switching hands. From practicing on a pillow I was able to switch the flogger from hand to hand with out missing a beat.

Now I kept up a steady rhythm to the beat of the music playing and it helped keep me going.

Did I keep the same rhythm throughout?

A number of times in between I either picked up speed or intensity. She picked up on the change immediately by either squirming and/or giving a slight squeak.
Never did she safe word.

We played like this for a good 45 minutes until the music stopped playing, once the music ended so did I.
Really I was surprise when the music stopped as it didn’t seem to be that long, I had lost track of time. That was another good reason to have some music cued up.

Once I had her sitting up and gave her some water and she drifted back down enough to talk, we discussed what had gone on.

she was in sub-space although not very deeply.
I asked her what she thought about her first experience with a flogger.
she liked it, she liked it a lot.

she described it as getting a massage with a bunch of leather strands, except when I picked up speed and/or intensity, then there was more of a sting.

I asked if she would be willing to have the flogger used on her again a some point.
she loved the idea, so much so she even named the flogger.

The point here being, for her first time with a flogger I made it a pleasurable experience. I managed to find just the right mix, not going to soft yet not to hard either.
Oh her ass was red to be sure and when we played at the club later I picked it up a bit.
What I didn’t do was go full out on her with it leaving her ass a blistered mess the first time out.

I left her not only liking it but wanting more, giving us something to build on.

So yes, when done right not only will they like it but it will leave them wanting more.